A downloadable book for Windows

Hi, my name is Yahya Mahomed and here is what to know about my game

Ice Age: the wasteland tale is a small prototype game that I made in a week or so for the A Game By Its Cover Jam 2016.

The game is an inspiration of the Famicon cartridge ICE AGE (link: http://famicase.com/16/index.html). I was not sure who the artist was so do forgive me if I did not read the details right, as it was all in Japanese.

The year is 20XX, Earth has entered a new Ice Age. Most of the planet's surface is frozen over, leaving no land habitable. Before humanity's impending doom scientists had created sleeping capsules that would protect the user from the harsh cold environment and sleep for an indefinite period of time before the surface starts warming up again. People bought these capsules and placed them in their own bunkers. This story is about how you, one day, awakened from your sleep and sought to survive in this new world, the ICE AGE.

A short description on the setting but don't expect anything too epic.

It's pretty simple the controls, just type out the letter displayed in the options menu and the press 'enter' button.

batch. Sorry about that.

One of the most critical problems you might encounter while playing this game is the grammar error. I know,

This was just a small prototype project that I just wanted to do so indeed if there are any grammar errors you can post it in the comments or send me an email for corrections, or even English lessons seeing that I might need one badly.

This game is free of course so, no biggie I suppose.

Feedback is highly recommended, hopefully I might learn my mistakes

Download the file and extract it to your computer. However if your computer doesn't allow it to run, just simply tell it to run anyway. Don't worry, its just a batch file not a virus. 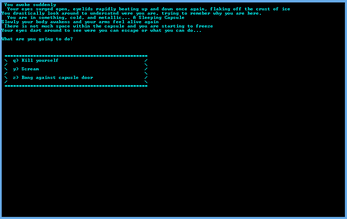 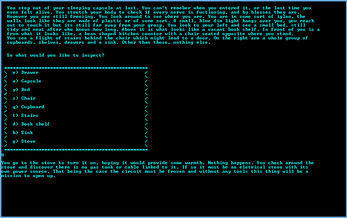